“It appears that these nonresidents believe our area is a safe haven because of its rural nature. To the contrary, the influx of people into our communities has had a staggering detrimental effect on our resources,” the letter to Kemp read in part. 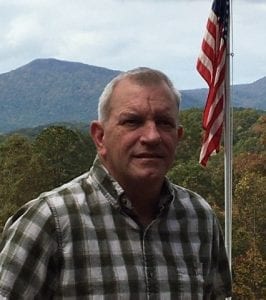 The letter outlines the resources in our area that have been affected by the out-of-towners looking to seclude themselves, included in these resources are food, dry goods and fuel.

It goes on to inform Kemp that our area is not equipped medically: “Our communities simply do not have enough hospital beds or medical personnel to care for the inflated population.”

Though only serving as a commissioner for a little over three months, Habersham County Commissioner District 5 Tim Stamey felt he needed to be proactive in bringing a solution to this problem: “I am a retired special operator and we don’t sit around talking about things, we get it done.”

Stamey who sits on the Habersham County Board of Health said, “I’m on the County Health Board and talk to Healthcare workers in my county on a daily basis. They are the heros/heroines in all this. This virus does not spread itself on the wind.”

Moccasin Creek State Park, situated just North of Unicoi State park has been “crazy, 4th of July crazy” for the past three weekends according to Stamey, who has witnessed the impact on his county first hand.

“I started this by just trying to get border counties on board,” Stamey said and added, “Then Chairmen were like well, did you call such and such, I know they feel the same way. It just kept getting bigger and bigger.”

Stamey said that all Commission Chairmen were helpful, on board, and taking the matter seriously: “I talked to most of them several times and for up to an hour each time.”

Stamey, along with the 12 county chairmen and many residents, is hoping that this letter will get the attention of Kemp. The letter in closing states: “On behalf of the many citizens that live in North Georgia who entrust us as County Commissioners to represent their interests, we respectfully ask you to close all of the state parks located in our area immediately.” 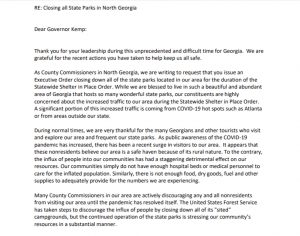 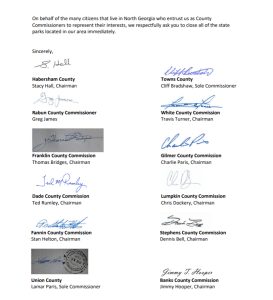 Click Here to read about National Park Closures in our area