The Calhoun City Council approved Felker Construction Company for building the new Calhoun Police Department station, vehicle service building, and a new recreation parks maintenance building. Felker Construction had the lowest bid at $4,802,490 out of 11 total bids. Funding for the project will come from the 2018 SPLOST funds.

The new police station would be 13,700 square feet, allowing patrol and investigations to be housed in the same building. It will also feature an indoor/outdoor kennel for the K-9 unit.

“We’ve never had that before,” said Worley. Worley commended Calhoun Police Chief Tony Pyle and Major Randy Gallman for working well with the city to ensure the needs of the department were met.

Worley said the current maintenance center at the Calhoun Recreation Department would be demolished and much needed basketball courts built. The maintenance building and the wash bay would be located at Recreation Drive and McDaniel Station Road.

Early voting began Monday and will continue through Friday, October 30.  The 2020 Presidential election is Tuesday, November 3.

“If you haven’t been to Piedmont Street, when I went by there, the line was out the door to the parking garage,” Palmer said. 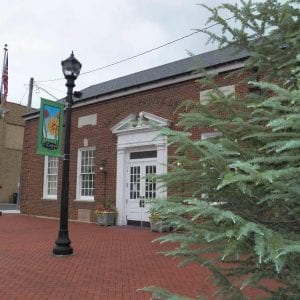 Contributed photo
Calhoun Police Department will be getting a new building, including an indoor/outdoor area for their K-9 officers from the 2018 SPLOST.

The City of Calhoun was awarded the Certificate of Achievement for Excellence in Financial Reporting for its comprehensive annual financial report for the fiscal year ending June 30, 2019.  The certificate of achievement is the highest form of recognition in the area of governmental accounting and financial reporting.  Andrea Bramlett, director of finance, received the individual award of Financial Reporting Achievement for her work with making the city eligible for the certificate.

“The city of Abbeville requested them, so they are apparently doing a good job,” Crowley said.

“It will take about two years to finish the project,” Edwards said.

Edwards also told the council that the Calhoun Police Department charged five people with driving under the influence.

“That’s the lowest we’ve seen in a while,” he said.

The board approved several rezoning and annexation requests as well as one alcohol license. Included were:

The council heard a first reading on the following. All will be eligible for a public meeting on November 9.